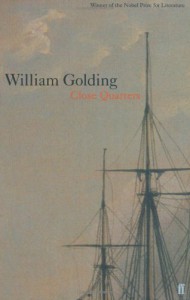 One should never ignore any nautical fiction – or non-fiction for that matter. There are so many classics. William Golding (of [book:Lord of the Flies] fame) won all sorts of prizes including the prestigious English Booker Prize for [book:Rites Of Passage], I stumbled across its sequel, entitled Close Quarters in a bibliography of books about the sea. Both books recreate life aboard a nineteenth century sailing vessel as seen through the eyes of Edmund Talbot, a passenger on his way to the Antipodes. Rites and Close Quarters are narrated in the form of his journal. Rites ends with the mysterious death of Robert Collev, a clergyman on board, Ironically, Close Quarters, the sequel, begins with Talbot's qualification that he no
longer has any story to tell. Wrong.

The ship is severely damaged during a freak squall because of the inaction of a drunken mate. Becalmed after the storm, they drift close to another British ship bound for India whose captain reports that the war with France (subject of all those O'Brian and Forester novels) is over. The crews and passengers use the ships' proximity and lack of momentum to celebrate the end of the war with a dance. Talbot
falls in love with one of the other ship's passengers, momentarily causing him to contemplate abandoning his prospective career in the Antipodes. That momentary love affair colors his actions for the rest of the voyage.

Wind arrives suddenly and the ships must continue on their way. Golding must have done his research, for the setting rings true. Eighteenth century ships were micro-universes, at the mercy of the sea, waves and wind. There is a vivid scene as Talbot makes his way below decks toward the bow, inthe darkness of the hold, the only light supplied by swinging lanterns providing tiny beacons as the ship
rolls wildly, its motion intensified by the damaged masts. Much shorter from the wind damage, they increased the rocking motion of the ship, much as the oscillations of a pendulum are much quicker, the shorter the pendulum. A completely dismasted ship "can have a roll so brief there is no living within it," explains one of the crew.

Soon Talbot's philosophical speculations become intertwined with seasickness, sloping decks and the realization that the ship is in danger of sinking. The ship's carpenter poking around, looking for spreading planks does not increase his confidence. Nor does the movement of the deck as the waves slide under the keel. The lieutenants reveal they no longer are able to sail before the wind and must rely on the currents to drift them "downhill" (as he is told to reassure the other passengers) until they reach Australia. Unfortunately, how they get there Golding postpones to the third volume. Creep!
Tweet
3430 BOOKS