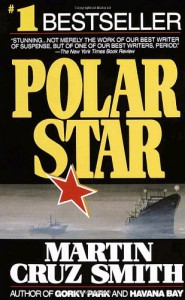 I’m not sure why I delayed getting to this title since I enjoyed Gorky Park so much, to which this book is a sequel of sorts. Of sorts, because it follows directly on the heels of Gorky, but the author in a few brief paragraphs lays out precisely why Arkady, formerly head investigator for the prosecutor’s office in Moscow is now working as a slimer on a factory ship in the Bering Sea.

It’s good. Those who don’t like what they view as excessive detail in Moby Dick probably won’t like this book either, but as you know, I wallow in all manner of detail and the descriptive scenes of working on the factory ship were quite interesting, particularly when they discover a slime eel (hagfish) in the body of a Russian woman who was dragged up by one of the accompanying American trawlers (it’s a joint Russian/American business.) Totally gross.

Because of his previous investigative experience, the captain pulls Arkady from the factory line and has him investigate, wanting to have everything kosher for the American observers on board. Arkardy is forced to walk a very fine line between those in power who see no reason for an investigation, nor do they want one, and his innate sense of justice that refuses to accept the official verdict of suicide when all the evidence points in a different direction. Everyone lies and everyone has nefarious reasons for doing so. It’s a world populated by paranoiacs and schemers.

Lots of reflections on Russian society; comments like “In irony we lead the world,” which in context is not only amusing but perspicacious. And, my goodness, Smith has a dim view of people in general if his books are any testament.
Tweet
3430 BOOKS