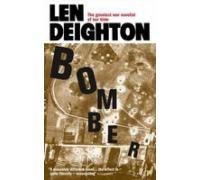 The title of this book implies it's the story of a single British bomber crew flying over Germany during 1943. It's much more. Deighton, known for his in-depth research, has given us a very realistic portrayal of both sides, the families of the bomber crews, the German citizens and defenders. Soldiers on both sides are frustrated by awkward interpersonal relationships and comrades with differing motivations. Deighton follows the crews of several bombers, sent on night-time raid against the Ruhr. Lacking night-vision goggles the crews had to release their bombs guided by flares dropped by scout planes. On this raid, the scout plane is shot down and its flares released short of the intended target, on the innocuous little town of Altgarten — of no military significance.

British strategy was to drop bombs in the center of cities, usually targeting more civilians than military installations and to mix in lots of incendiaries and horrible phosphorous bombs to increase the damage. The soldiers of both sides are beleaguered by insidious forces in command. On the German side, Himmel, one of the best night-fighter pilots has stolen some medical documents that expose SS medical researchers using concentration camp as human guinea pigs in freezing experiments, so the Abwehr and Sicherheitsdienst want him arrested. In Britain, Lambert has the temerity to want to be with his wife rather than play cricket for the squadron team in an important match. He's also something of a rebel and because of that is being labeled LMF (Lacking Moral Fiber), i.e., a coward.

In the meantime, the farmers and citizens bemoan the loss of excellent farmland to huge airfields, land they know will never be returned. Neither are the citizens without flaws, as they funnel stolen and looted goods into their own pockets.

I particularly enjoyed one exchange. August Bach, a German pilot, is returning to his base with his friend, Max, when they are held up by a convoy directed by Vichy police.
"A Frenchman," said Max angrily. "They are a logical race. They should make good traffic police."
"Huh," said Max. "Logical. They put a knife between your ribs and spend an hour explaining the rational necessity of doing it."
"That sounds like a lot of Germans I know."
"No, a German puts a knife into your ribs and weeps a sea of regretful tears."
"August smiled. "And after the Englishman has wielded the knife? He says, 'Knife? What knife?' "

Sometimes the horror of war is brought home more vividly by almost dispassionately describing the raw facts. For example, a crew member’s chute fails to open after bailing out from his Lancaster. Falling from 16,000 feet at 120 miles per hour (his body's terminal velocity) he hits the ground in 90 seconds and makes an indentation 12 inches deep.

Neither side is favored in this work. Deighton read several hundred books in preparation and interviewed many survivors and the epilogue tells us where they are today. He focuses on the shared humanity and suffering, selflessness and heroism endemic to war. This book rivals Slaughterhouse Five and Hiroshima as a statement of the horror and stupidity of war.
Tweet
3430 BOOKS